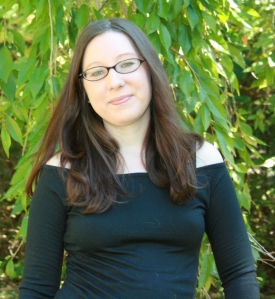 When not penning stories filled with magic, moonlight, and romance, I read tarot cards, wander the woods in search of portals to the faerie realm (so far, no luck), and spend way too much time collecting crystals.

I share a whimsical home in Virginia with my gamer-geek husband, two magical cats, and a dog most often described as hyperactive.

Over the years, I’ve infiltrated nonmagical society by shelving books at a public library, serving as assistant editor at a magazine, and teaching media writing at a university. I studied communication and creative writing at the University of Pittsburgh at Johnstown and hold an M.F.A. in children’s literature from Hollins University.

I currently teach English as a second language, work at a local public library, and write fantasy and romance for teens and new-adults. I’m a member of the Romance Writers of America, including the From the Heart Romance Writers chapter.

My short story The Forest’s Own appears in the summer 2018 issue of Starlit Path Magazine. I was a first-place winner in the 2015 Pages from the Heart contest and earned a second-place finish in the 2016 Cleveland Rocks Romance Contest. Inspired by authors like Sarra Cannon and so many others, I’ve decided to embrace an indie author path. More details coming soon!

Faeries, witches, and happily-ever-afters await. Turn the page. Find yourself swept up in the magic…