Today I’m pleased to interview Celine Jeanjean, author of The Bloodless Assassin and The Black Orchid, two steampunk adventures that I’ve personally read and enjoyed. Today she sits down with us to talk about writing process and her favorite steampunk reads.

First of all, Celine, thanks for stopping by the blog!

Tell us a little about your writing process. Are you a plotter or a pantser? Do you tend to write concise and expand or write long and cut mercilessly?

Thank you so much for having me!

I’m a bit of both, although I’m leaning more towards pantsing these days. I always have at least a rough idea of what will happen with a story — so for example with my first two books, I had a very basic outline in place which was more like the tent poles of the story (protagonists, antagonists, inciting incident, mid-point, ending) and then I left myself free to improvise my way from one pole to the other. I’ve since then written a book without any kind of outline, but even then I had a very rough idea of the story in my head, so I knew where it was going even though I didn’t write it down beforehand.

The thing I don’t like about outlines is that they can feel stiff and constraining. Also, when I write an outline, it’s almost always done with the analytical / critical side of my brain, rather than from the creative side, and of course the creative brain is where all the good stuff comes from. So I think going forward I’ll mull through the whole story in my head before I start, a kind of mental outline, I guess, but after that I’ll pants my way forward.

And I’m more of a concise writer who expands (although I have been known to make drastic cuts. The largest was 30k words on the cutting room floor. That was hard) but the way I look at it is that my writing is a process of layering. Setting especially. I’ll often need several layers before I can get the full sensory experience of it right. I also work in layers as far as my characters’ emotions, too.

At the moment my writing days are all over the place as we’ve just moved to a new part of Hong Kong, and it takes me a little while to find my rhythm in a new place. But in an ideal day I get up very early, at the moment around 5.30am, and I go hiking or running with my dog. If I’m hiking, I’ll often daydream my way through parts of my story, and I’ll often get some good writing material that way.

Then once I’m ready for the day, it’s bum in chair for the rest of the morning. Some days I write in short bursts if the writing is coming slow — on those days I need frequent breaks (and I often have to really force myself to keep going). On days the writing flows well I have been known to sit hunched at my desk without moving for the entire morning and well into the afternoon, which is great for my word count but murder on my back. And for my diet too, because then I forget to eat lunch.

If I can, I’ll write most of the day, taking the dog out again during the afternoon for a walk, which is when I read, on top of in the evening. I’ve perfected the art of reading and walking, which is super handy, although I do get the odd stare. I try to do a good amount of reading every day, and I squeeze it in anywhere or time I get the chance. I find that if I slow down on the reading front, it affects my writing, so I kind of consider it a part of my writing process, and I cram as much of it in as I can.

I don’t leave nearly enough time for blogging/ social media/ marketing and the likes, though. That’s still a work in progress!

What part of writing craft do you struggle with most, and how have you strengthened that part of your writing?

First draft writing is what I struggle most with. I’m a recovering perfectionist so I can get frozen in front of the page (blank or not it makes no difference) on days when the writing isn’t going well. I tend to draft in spurts, with some scenes pouring out of me, while others are like pulling teeth. I’ll have days where I can hammer out 2k words in an hour and be really happy with the results, and other days I have to fight to write anything, and the few words I do dribble out are terrible and wind up getting deleted/rewritten.

I’ve slowly worked out that if I write a scene purely because it’s what needs to happen next, that’s when things don’t go so great. For a scene to work for me, I have to find the ‘awesome’ in that scene, whether it’s a really cool setting, a piece of dialogue I love, a particular emotion or tension… The trouble is that I don’t always find the ‘awesome’ in a scene right away: that might not appear until a couple of drafts later. But now that I’m aware of this, during my morning hikes I’ll often purposefully daydream the scenes I know I’ll be writing later in the day as daydreaming is often when I come up with stuff that I think is cool. So it’s slowly getting better.

You’ve created a really vivid world populated with colorful characters. What are a few writing exercises you use to help you learn about your world and those who live in it?

Well thank you! I don’t use exercises per se but I do use a lot of research for the creation of my world, whether it’s books/the internet/photos, or mining my own experiences. I did a whole post about the things I used in creating Damsport here.

The main thing for me is that world building and setting is purely there to support the story. The world is therefore very much dependent on the characters who live in it, and so I build it as I write the story and discover my characters. rather than creating it separately/before writing the story. I’ve found that, as a result, my worlds often change and grow organically as the story and characters evolve, too.

These days I’m much better at identifying the world a character lives in from my first impression of that character, so they go through less drastic changes, but, to give you an idea, Damsport started off as based on a French Mediterranean port city in the 17th century. That was because at that point I only had Longinus in mind. And then as I created Rory, I realised that Damsport was in fact quite a different city from what I’d initially thought, and then Cruikshank was the final element — by the time she was created, Damsport was what it is now, just missing details and layers, of course. And then after that, the world was solid enough to influence the creation of other characters, such as the Old Girl, for example, or Crazy Willy and his steamcoach.

Many many! Scott Westerfeld’s Leviathan is brilliant, with phenomenal world building and it’s one to read for those who like Rory. Lindsay Buroker’s Emperor’s Edge series is great fun, and it also features an assassin, but he is as far removed from Longinus’ brand of assassination as can be. For straight up, ‘classic’ steampunk Shelley Adina and Gail Carriger are great (Gail Carriger’s books are also really funny). And then if, like me, you’re a fan of the weird and wonderful (heavy on the weird), China Mieville’s Perdido Street Station and Railsea are fantastic. They’re on the fringes of the steampunk genre, but they’re great stories, and of course beautiful written.

Okay, so I have to ask. What’s up next for Longinus and Rory as the Viper and the Urchin series continues?

Lots of adventures!! In book 3, they get sent to a new city called Azyr on a rescue mission, and I’m having a lot of fun building this new world. That book is more straight up caper and adventure. Then in the more distant future I have plans for Longinus and Lady Martha, for Rory and Rafe, and at some point there will be a proper confrontation with Myran. The idea is that although every book will stand alone, we’re going to follow Rory and Longinus as they grow up and come into their own (it’s anyone’s guess which of the two needs to do more growing up!)

Thanks again for having me, this was fun! 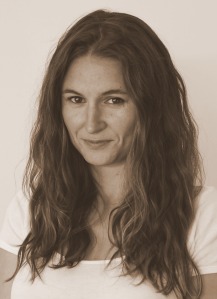 Celine Jeanjean is French, grew up in the UK and now lives in Hong Kong. That makes her a tad confused about where she is from. During her time in Asia she’s watched the sun rise over Angkor Wat, lost her shoes in Vietnam, and fallen off a bamboo raft in China.

Celine writes stories that feature quirky characters and misfits, and her books are a mixture of steampunk, fantasy, and humour. You can find her books here: http://www.amazon.com/Celine-Jeanjean/e/B01081K1RC/

To find out more about Celine or just to chat, visit  her on: