When I was working on revising and tightening the plot of my first paranormal romance novel, MADE OF SHADOWS, I read a lot of romantic suspense. Though most of the books I read didn’t have paranormal elements (but some did), I learned plenty from reading tightly written books that packed heat and romantic tension in with smoking guns and characters on the run from crazed killers hell-bent on revenge.

Talented authors of romantic suspense know how to create plots that interweave the development of the hero and heroine’s relationship with an action-packed mystery. Here are a few things I’ve learned from my favorite romantic suspense authors. 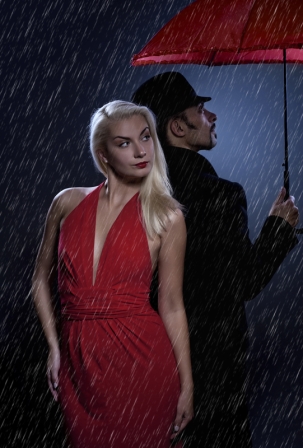 When I attended a workshop on writing romantic suspense earlier this year, author Mary Burton offered plenty of tips on how to write a good novel in the genre. But it was this phrase that stood out to me the most because it applies to every genre. All was normal in Kansas until a twister whisked Dorothy off to Oz. Frodo was enjoying his uncle’s birthday party in the Shire until Gandalf showed up to inform him that he had to deliver an evil ring to the fires of Mount Doom. In each story, we might get a taste of the usual, but we’re immediately plunged into chaos.

2.)  Be mean REALLY MEAN to your characters.

One of my professors in graduate school used to tell us to chase our characters up a tree and then throw rocks at them. We wouldn’t have fallen in love with Frodo and Sam if they’d stayed in the Shire. We love them because Tolkien put them through hell. We went along with them because we wanted to see them make it.

Except Tolkien, perhaps no one knows how to put characters through hell better than a romantic suspense author. Rebecca York is one of the best. By the end of her novels, her characters have been shot at, framed, abducted, or chased by the killer (or, in some cases, by the police or a government agency); they’ve witnessed crimes and narrowly escaped death. But it’s that ticking bomb that keeps readers turning the pages. Romantic suspense authors don’t just throw rocks at their characters. They set the tree and fire and then start heaving boulders. Regardless of genre, we always want the reader to be thinking, “How the heck are they going to get out of this one?”

3.)  Let the characters drive the plot.

Romantic suspense melds both a love story and a happily-ever-after ending with a sometimes gritty tale of crime and mayhem. They’re fulfilling the conventions and reader expectations of two genres simultaneously. It can’t be an easy task. It would be all too easy to let the writer take over and start steering the plot in the right direction.

But the most successful novels in this genre don’t allow the writer to force the story. Instead, the characters are behind the wheel, their steps and missteps fueling the plot. It’s their flaws that get them into messes (pride, stubbornness, a false sense of invincibility, a need for revenge). Only if the characters grow and evolve—learning to trust each other while overcoming their weaknesses and accepting their limitations along the way—can they make it through the situation in one piece. If we’re stuck on a particular plot point, sometimes it can help us to stop saying “What needs to happen?” and start saying “What would character X do in this situation?”

4.)  Give your characters a higher purpose and deeper longing.

Characters in romantic suspense novels have a clear goal: catch the killer, diffuse the ticking bomb, or rescue a kidnapping victim. But while that’s their goal, it isn’t their motivation. We can find it easy to say, “What does my character want?” but harder to ask, “Why does he/she want it?” Talented romantic suspense authors know what drives their characters. They know that Sally became an FBI agent because her mother was murdered and the killer is still at large. They know that Tom, the rogue PI, is willing to help Sally because she reminds him of someone he once failed and offers him a shot at redemption. It’s not enough to diffuse the bomb or stop a serial killer; the characters need a deep-rooted longing that fuels their quest—even if they don’t recognize what truly motivates them.

Most romantic suspense novels aren’t 600-page tomes. Instead, they’re action-packed and tightly written. If you struggle with deciding which scenes to keep and which to delete, reading a handful of romantic suspense novels can offer guidance as to how to keep the plot moving. It would be easy for these characters to spend an entire chapter locked in a dingy hotel room plotting their next move, but something always happens that puts a snag in their plans, forcing the characters—and the plot—to move forward. Through reading romantic suspense, I’ve learned how to keep my characters moving.

What about you? What are some of the best lessons you’ve learned from your favorite authors?