Please join me in welcoming my first guest-blogger, the lovely fantasy and sci-fi author Samantha Warren. Today, Samantha’s character Jane is offering us a few survival tips in case we ever find ourselves face-to-face with a vampire assassin. (Hey, it’s Halloween; anything can happen.)

So, I hope everyone has a great day stuffing themselves with candy corn and other assorted goodies. Happy Halloween! (Or, if you walk the Wiccan way, blessed Samhain.) The surprisingly chilly last few days, complete with sleet on Friday, have pretty much dampened the last blast of fall color that remained on the leaves, but those cold, rainy days are perfect for dreaming up mystery, I suppose…

And now, I’m handing the blog over to Samantha’s leading lady, Jane. 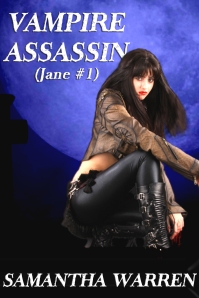 Hi folks! I’m Jane, your resident vampire assassin, here to give you a few tips for surviving the Halloween season. Ah, Halloween. The time of year when you carve pumpkins, eat way too much candy (or is that Christmas?), and dress up like scary movie villains. Ghouls, goblins, werewolves, and blood-sucking vampires are all popular choices. Luckily for you, it’s unlikely you’ll ever really be mistaken for one of those creatures and hunted by someone like me. But what do you do if you draw the ire of a vampire? Well, if I’m the one hunting you, you may as well give up. I always get my man (or woman, or big bad evil thing). The tips below should help you escape the clutches of the lesser assassins of the vampire ilk and allow you to wreak havoc on the world for another day. If you’re a werewolf or other baddie, please look away now. Save us both some trouble and head to the nearest church to turn yourself in.

Separate the myth from the truth.

There are numerous vampire myths out there that have been perpetuated by one Mr. Bram Stoker. Why would he do such a thing? Well, he was a vampire himself. It was in his best interest to mislead the masses about what could and couldn’t hurt a vampire. I’ll address a few of the more popular misconceptions.

Garlic: While I would love to let you all run around wearing garlic necklaces like they’re the next fashion, I have to dissuade you from doing something so ridiculous. It will just make you look silly and smell horrible. Garlic does nothing but add flavor, and if you don’t want to be sucked on, don’t make yourself more tasty.

Crosses: Another falsehood. A large portion of the vampire population actually works for the church in some form. Many of them can even be found on the pulpit. If you’re being hunted by a vampire assassin, there’s a good chance it’s because a church elder hired one. Yeah, a cross isn’t going to help you there.

Silver: *looks at silver rings* Nope. Not effective. It does work against a werewolf if you can get it in their bloodstream or under their skin. I always keep some handy.

Running Water: Vampires like a good shower as much as anyone. Getting one wet will do little aside from make them madder. I advise against making a vampire angry if they’re already hunting you.

Wooden Stakes: Stakes are great, and not just for vampires. They hurt like the dickens and will take out almost anyone if used properly. The biggest problem is keeping the stake in the heart long enough to cause serious damage and blood loss.

Fire: Like stakes, fire is fantastic for defending against anything but a fire faery. Fire hurts, but, more importantly, fire destroys. Once you’ve got your vampire attacker staked, pull out some gasoline and a match and set that baby aflame.

Sunlight: Yes, we are allergic to sunlight, but it has to be direct sunlight. And we don’t fall asleep once it rises. Full vampires will develop a nasty sunburn within moments of direct exposure and if forced to stay in the sun too long, blisters will form and expand, our skin will smoke, and eventually we become a raw mass of roasted flesh. It’s really disgusting and a very cruel thing to do to even your worst enemy.

Decapitation: Along with stakes and fire, decapitation works on almost anyone or anything. Very few beings have the ability to regrow the loss of something so important as their head.

Coffee: Mmm… coffee… Coffee is a drug to vampires. We love it. The stronger, the better. Almost all of us drink coffee. But we have to drink it very slowly and in small amounts, or it can incapacitate us. No venti quadruple-shot lattes for us. Once we’re incapacitated, any of the other methods will be a lot easier to apply and that will be the end of the line. It is also possible to take down a vampire by dousing them in the stuff, but it requires a lot more of it and if you don’t do it quickly, you’ll just have an irate killer on your hands.

So there you have it. Some of the myths are just that—myths. But there is truth buried in the lies, as always. Now I’ll give you the No. 1 foolproof way to avoid being taken out by a vampire assassin:

Simple, right? And surprisingly easy. Be a decent person and you won’t have to worry about me breathing down your neck at any point. But if you decide to try to take over the world, know this: I will find you, and I will destroy you.

Have a lovely day!

Want to know more about how I became a vampire assassin? The first book in my aptly-titled memoir series is free everywhere, and books 2-4 are 1/2 price on Kindle. I’m working on book 5 (Til Death) right now and it should be out in December, so keep your eyes peeled! 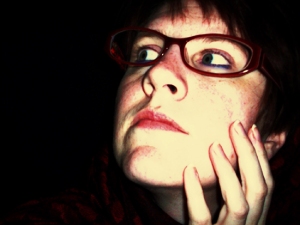 Samantha Warren is a fantasy and science-fiction author who spends her days immersed in dragons, spaceships, and vampires. With her pet dragon, Anethesis, she ventured to the ends of the universe, but the cost of space travel cut into her sock fetish fund, so she sold her ship and returned home. When she isn’t writing, she’s milking cows or trying to feed them Pop-Tarts. She spends a lot of time in her weed patch (aka: garden), watching any show featuring Gordon Ramsay, or posting random things on her blog.

3 thoughts on “How to Escape a Vampire Assassin: A few survival tips for Halloween from guest-blogger Samantha Warren”